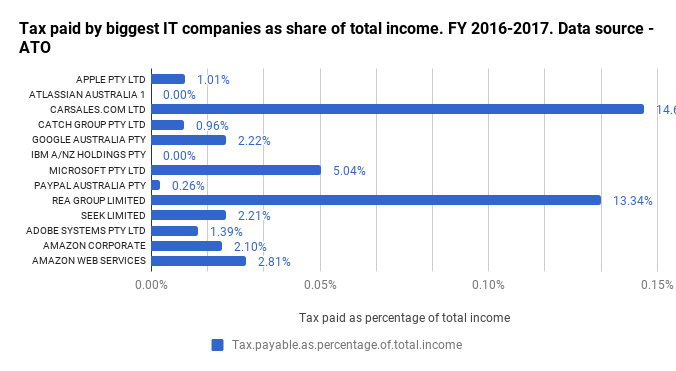 How the bigges tech companies paid their share of taxes in Australia, 2016-2017 data

ATO has published a fresh data about the biggest taxpayers, so I decided to revisit how the biggest and apparently the best Aussie and global technology businesses with Australian presence paid their taxes. I wrote a similar blog post 2 years ago with 2014-2015 data used, so was very curios to see the changes.

Here is what I’ve found in a table form:

The last 2 columns is tax paid as a percentage of total and taxable income.

So what we see:

There were interesting discussions in social media after ATO released this data, for example here is Tweet from Mark Ritson that sparked number of replies

On the company website I have found the next information

Is it good enough to compensate not paying income tax in home country?

I am not sure, but you may have a different opinion.

IBM has a whole website section about Corporate responsibility. It features the next quote from IBM Australia Managing Director:

IBM is not defined by what we make, but by the difference we make in the world. Our innovation isn’t only technical – IBM was one of the first companies in the world to have Environmental Policies, Diversity Policies & Recycling Policies. We understand that responsible and ethical conduct is the best way to grow as an organisation, as a community, and as Australians.

It also publishes reports, the last one I see is for 2013 though.

On Yahoo! Finance we may notice that for year 2017 (it is a bit different in US, but anyway), there was $5.8B of Net Income From Continuing Ops reported.